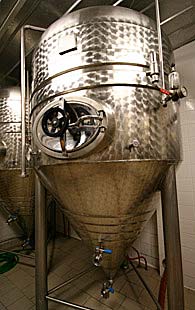 About the brewery Pegas microbrewery was established as one of the first in Czech republic after 1989 and was even the first opened one in the Moravia region. Reconstruction of building which is dated back to 14th Century has began in 1990 and was finished in 1992 as well as the restaurant and hotel part.

So-called heart of the brewery, the brewhouse is situated in the restaurant part. It has a capacity of 2000 liters (4000 beers) and one batch takes cca 8 - 10 hours to brew. Primary fermentation takes place in stainless steel CCTs and lasts 7 days in teperatures between 8 and 20°C, depending on different beer styles. Afterwards the young beer rests in conditioning tanks in temperature of 3°C for at least 30 days in case of lager beer.

Our beer is made of Záhlinice floor malt from Northern Moravia region, special malts from Weyermann malt house of Bamberg and Saaz hops. We also use different kinds of foreign hop varieties and yeast strains to produce limited editions of special beers. Brewery produces 230 000 liters of beer annualy.

Almost 80% of production is sold on tap in the Pegas restaurant. Four kinds of beers are brewed regulary. They are bohemian pale lager (Svìtlý ležák), Oatmeal Stout, bavarian-style wheat beer (Pšenièné pivo) and Gold, a strong lager. Besides that are prepared special batches in limited volumes of 2000 or 4000 liters, which change after each other on the 5th tap. So have been brewed beer styles such as Weizenbock, Roggenbier, Amber Ale, Porter, I.P.A. and others.